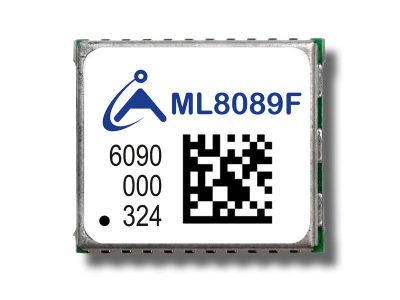 ML8089F – the newest product of NAVIA on Teseo III family chipset. The ML8089F module is intended in the exterior of the most popular ML8088sI (sE) module and made by the principle of the “reverse” compatibility”, that is, ML8089F has the same footprint as ML8088sI (sE). In comparison with the predecessor, the module became more sensitive and energy consumption is significantly decreased. In addition, the module utilizes some outputs not used at ML8088sE.

ML8089F got excellent abilities in sensitivity at the level of -162 dBm, high accuracy of positioning to 1.5 m and the quick decision of the navigation task. 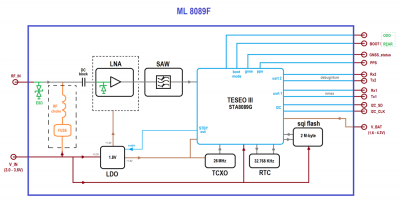 In the module, there are the new chip (SoC) STA8089G from the Teseo III family, the built-in LNA and the SAW filter. For supplying an active antenna, the circuit of the fuse and the choke is set. The built-in LDO transforms input voltage of 3.3 V (3.0-3.6 V) in 1.8 V for a supply of a core (the navigation chip) and the active internal periphery. In the low consumption, in particular, in “sleep”, the core disconnects this LDO. The PPS and GNSS_status signals, and also two serial ports (NMEA and control) as well as I2C and GPIO interface are brought outside. By means of last two, it is possible to connect the accelerometer, the gyroscope, the odometer and the signal of a backing. After that, the dead reckoning becomes available in the module. An opportunity to determine location by two different systems is an important feature of the ML8089F module and navigation chips of Teseo III in whole! This opportunity appears with a specialized firmware. As Flash-memory is applied in the module, the customer can finish a firmware for own needs by means of SDK. In this case, outputs of UARTs, GPIO and the I2C interface can be used for the solution of any specific tasks, for example, for connection to an external bulk memory, sensors of any type, for control of the 3G/GSM module, etc.